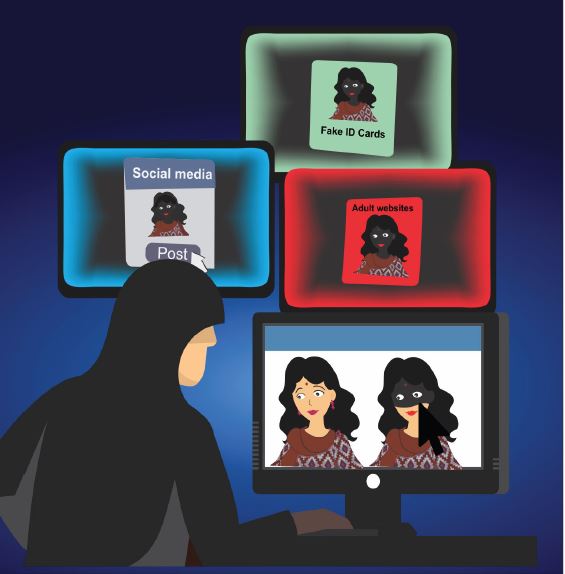 Why should we be concerned?

Morphing can damage your online reputation and cause emotional trauma, you can be prone to threats from perpetrators and may fall prey to their attempts at blackmailing you.

How can we safeguard ourselves against such offence?

Morphing can cause social stigma and can have damaging effect on you. It is therefore important to understand the measures that can help you stay safe.

What is the action to be taken in case we are affected by this offence?

Know about what the law says with regard to this offence?

Morphing may based on the context of the incident attract the following sections as per IT ACT.

This section covers the transmission of images of "a private area of any person without his or her consent". The punishment for the same is imprisonment for three years or with fine not exceeding two lakh rupees, or with both. This section is extremely important as Right to Privacy has been recently held to be guaranteed as a fundamental right and protected under the Right to Life in Part III of the Constitution of India, in the landmark judgement in Justice K. S. Puttaswamy (Retd.) and Anr. V. Union of India and Ors.3 Sharing of any content that would be a breach to the privacy of a person, therefore, would also be violating Article 21 of the Constitution of India.

This section deals with the publishing or transmitting of obscene material (described as "any material which is lascivious or appeals to the prurient interest or if its effect is such as to tend to deprave and corrupt persons"). The punishment on first conviction is imprisonment up to three years and with fine of five lakh rupees, and subsequent convictions to be punished with imprisonment upto five years and fine which may extend to ten lakh rupees.

The section punishes publishing or transmitting of material which contains sexually explicit act or conduct. The punishment on first conviction is imprisonment up to five years and fine up to ten lakhs. Since the Bois Locker Room incident involved sharing of morphed images of girls, the present section is applicable.

Section 67B- Punishment for publishing or transmitting of material depicting children in sexually explicit act, etc., in electronic form

The present section on first conviction provides punishment of imprisonment up to five years with fine up to ten lakhs.

This section covers not just the depiction of children in sexual acts or conduct, but the creation or distribution of any digital text or images that depicts children "in obscene or indecent or sexually explicit manner".

It is pertinent to note that the present incident involves sharing of obscene or private images of minor girls. Therefore, the present section can also be recourse. Further, many of the comments and discussions also might fall within the ambit of this section.

This section was added to the IPC vide the Criminal Law Amendment Act, 2013. The amendment act of 2013 was brought after the notorious gang rape and murder of victim Jyoti Singh, known as the Nirbhaya case4 , and introduced a set of amendments to the IPC, including section 354D.

Section 354D(b)includes "monitoring the use by a woman of the internet, email or any other form of communication". Therefore, collecting pictures of girls from their social media profile would be covered under this section. The section provides for a punishment of upto three years and a fine upon conviction.

Digital alteration of a photograph would fall within the ambit of making false electronic record.

Section 509 – Word, gesture or act intended to insult the modesty of a woman

Outraging of the modesty of a woman is a section which is frequently used in consonance with other sections of IPC involving sexual assault. In State of Punjab v. Major Singh, it was held that when any act done to or in the presence of a woman is suggestive of sex according to the common notion of mankind, such an act would be covered under this section. Messages passing lascivious comments upon the physique or body of the girls whose images were circulated in the group can be covered under this section. The punishment provided under this section is imprisonment upto one year, or fine or both.

Defamation can be taken recourse to by the victims in this case. Section 499 IPC requires that either making or publishing allegedly defamatory statements about a person in the form of other words or writing or visible representations which have the capability of harming a person's reputation along with the intention for the same. Therefore, men's reason to cause harm to the reputation is a sine qua non for an offence under this section. The victims, if they chose to, can take recourse under the present section. Section 500 IPC provides the punishment for defamation which is simple imprisonment for a term of upto two years or with fine or both.